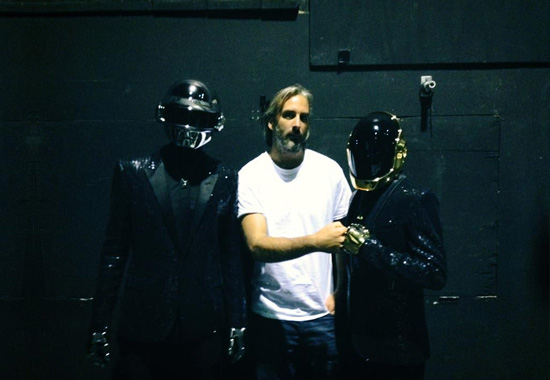 Best known for his collaborations with Daft Punk, and smash hits ‘So Much Love to Give’ and ‘Together’ (with Daft Punk’s Thomas Bangalter), the French House Maestro will be gracing the very stage that his robot friends did when they wrote themselves into Melbourne house music folklore back in 2007.

Falcon has also remixed many artists such as Phoenix and Cassius and has toured the world for over 20 years playing alongside The Chemical Brothers, Daft Punk and Kitsune. His DJ sets are inspired by a touch of electro, old school, house classics &  indie dance. Just what you need to get you primed for the Reminisce countdown.

Together (DJ Falcon & Thomas Bangalter) – So Much Love To Give

Guillaume Atlan a.k.a. The Supermen Lovers is responsible for the song with the 3rd most Reminisce countdown votes of all time, THE Melbourne anthem for almost 15 years, the-one-and-only Diamonds For Her.

Not to mention, a little tune you may have heard of called Starlight…

Listening to The Supermen Lovers’ records is discovering an ace melange of passionate, highly-trained musicianship and modern production; a unique, organic sound made of synths, sequences and real, played instruments, every single one of them recognizable since the first bars.

Get ready to Guillaume to unleash all of his Reminisce countdown charting prowess on the bowl, delivering a set that will have you rocking from start to finish.

The man who has delivered all eight Reminisce countdowns and countless memories for house music fans around Australia and the world over the past 30 years will be back once again to take you through the Top 50 house songs of all time, as voted by you.

There’s not really much more that needs to be said about the king of Australian house. The best thing to do now, is to watch and to listen 👇🏽

Listen To The Full Reminisce 2019 Top 50 Countdown On Soundcloud

John Course drops Lovebirds – In The Shadows at Reminisce 2019

TV Rock are one of Australia’s biggest dance music exports, topping the overall ARIA charts and winning 2 ARIA awards with their monster hits ‘Flaunt It’ and ‘The Others’ in the late 00s.

Throughout the 2010’s they went on to collaborate with and remix some of the biggest electronic artists in the world such as Calvin Harris, Tiesto, Axwell, Groove Armada, Armand Van Helden and Paul Van Dyk to name but a few.

In 2020 we bring them back to the main stage of The ‘Bowl, the site where they dropped one of their most iconic sets, at Summadayze in 2007.

The boys will be delivering a classics set for the ages, sweeping through their back catalogue of 15 years of the house and electro bombs that they’re most known for.

Joining them on vocals is Melbourne house music darling and voice of some of the biggest Australian house anthems of all time, miss Zoe Badwi.

It was late 2008 when this dance-pop diva burst on to the scene with the huge club smash Release Me.

Produced by TV ROCK, it spent a massive 7 consecutive weeks in the #1 spot on the Australian ARIA Club Chart and scored both ARIA and APRA nominations, on the way to international acclamation from acts such at The Freemasons.

But in mid-2010, Zoë hit us with Freefallin’ – proving to be her finest moment yet. Fusing classic club beats from Australia’s own Denzal Park with powerful, heady vocal and anthemic keys, Freefallin’ is a dance-pop triumph.

Zoe will be joining TV Rock on stage, providing vocals for a selection of tracks, whipping the crowd into a frenzy and setting the perfect tone for the countdown to come, just as Sneaky Sound System did at Reminisce 2019.

Separately they are Sean Rault and Oliver James, two of Melbourne’s finest house and techno DJ’s that have been filling dance floors around the country since the early 00’s.

Together they are Market Memories, who from 2015 to 2018 steadily rose to one of Australia’s most in demand acts and in 2019, took the world by storm with their hits ‘A Good One’, ‘Two Good’ and ‘The Charm’.

Having been played by acts such as Camelphat, Patrick Topping and Denis Sulta at festivals such as Tomorrowland, Creamfields and Kappa Future and playing themselves at Beyond The Valley, Rainbow Serpent and Pitch, 2020 is set to be their biggest year yet.

Market Memories destroying the dance floor at Beyond The Valley 2020

Playing their fourth consecutive Reminisce, Sean and Oliver will be winding back the clock as usual, delivering a classics set that lends itself to their house music roots with a zealous load of energy that they are candidly known for.

Listen to Market Memories ‘Old But Not Forgotten’ Classics warm up mix they delivered ahead of Reminisce 2019.

Through interactive countdown events, Reminisce takes you on a musical journey back to the time where the weekend was all that mattered.